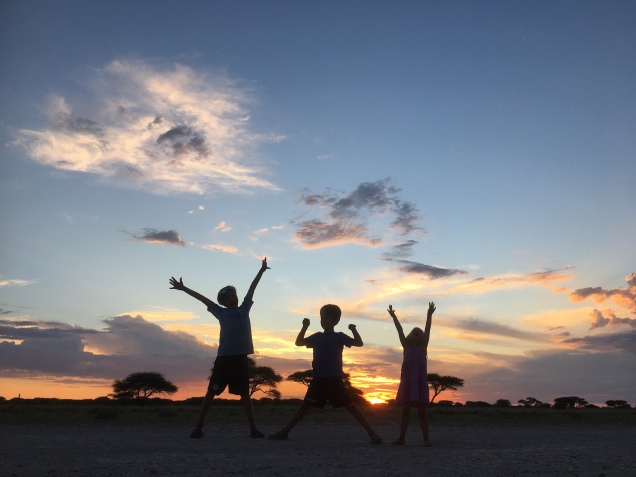 With the school having a long weekend to mark half term, we packed the car and headed for the the Central Kalahari Game Reserve. The school year is divided into three terms and each term has a long weekend half way through. The drive took us 6 hours, first heading 90 km east from Maun, before turning south for another 110 km. The road was really bad in places, slowing us down quite a bit. At a place called Rakops, which lies on the edge of the makgadikgadi pans, we turned west onto a sand track for 100 km. Rakops is surrounded by vast horizons and is very bare. 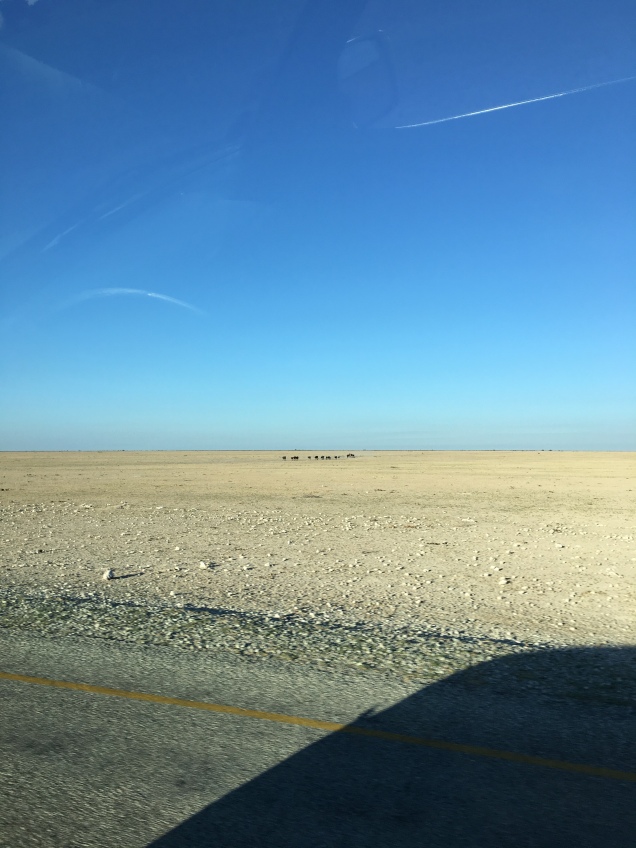 We had left home mid day, a bit late, so we arrived at the campsite just as the sun was setting. To find someone else’s tent already pitched there. We could not wait for them to arrive back from their evening safari as the wind was picking up speed and it seemed there was a storm coming in. So in a hurry we got the tents out and started to put them up. The wind was whipping sand around us and stung the exposed skin and eyes. While the kids helped hold the tents in place I tied them down with ropes. Having placed the car and trailer upwind in front of the tents gave us a bit of shelter, but made it challenging non the less, especially as it was dark. Luckily the rain stayed away! The other tent had been blown into a nearby thorn tree and when the owners arrived back they realized they had taken the wrong site. They packed up and move to their designated site without a fuss. The wind stopped and the sand storm subsided, so we could make a fire and have some sandwiches before heading to bed. We woke to a calm and warming kalahari. 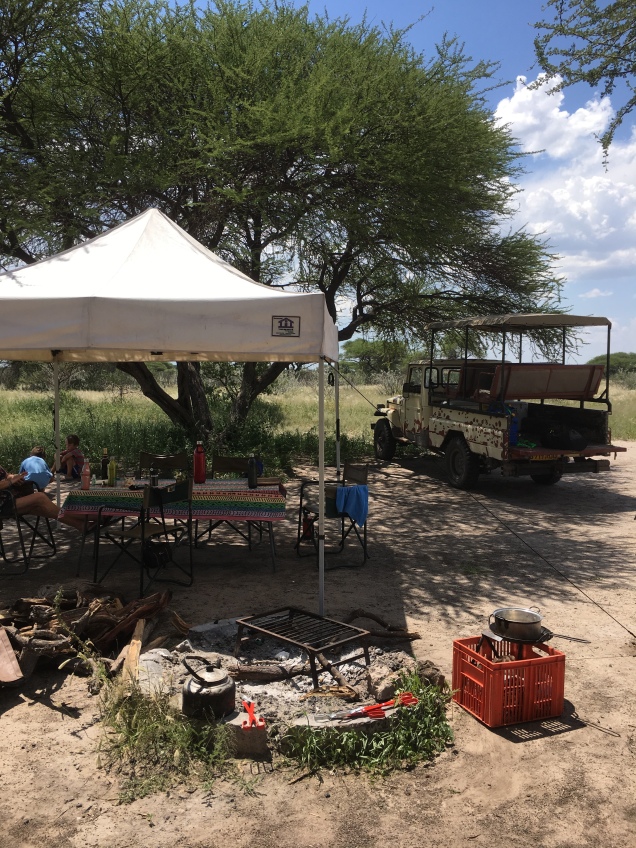 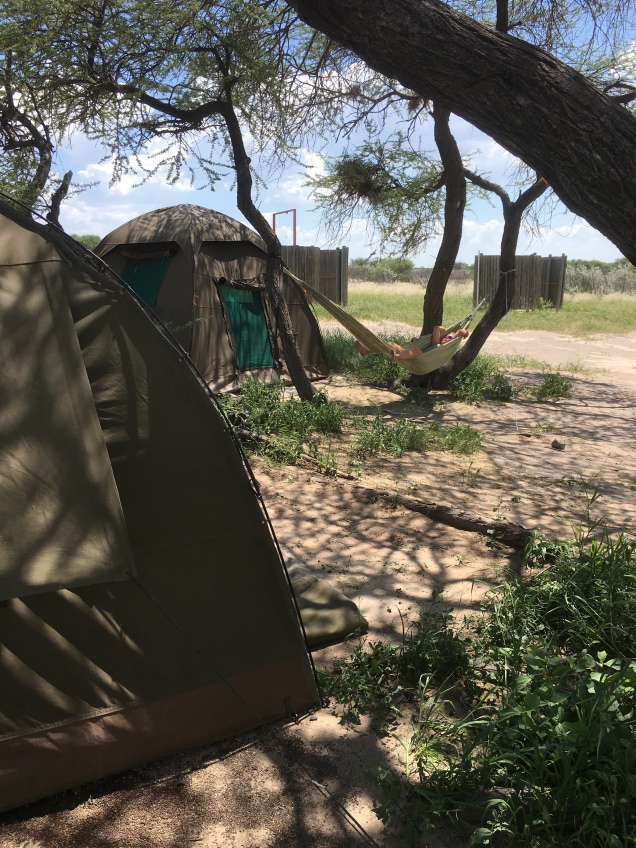 The acacias gave little shade, but luckily we had borrowed a gazebo. We spent the next few days lazying around in the shade, conserving energy and going on game drives early in the morning and evening. Filling the water flasks before sunrise, taking advantage of the night’s coolness, which had cooled the drinking water in the jerrycans. Temperatures soaring to above 40C in the shade during the day heated the water to unpleasant temperatures later in the day. Although we had cool boxes with ice, it had melted away by the second day.

On the first evening safari we found a pack of 8 wild dogs challenging a small heard of wilderbeast, trying to attack the young. But the alpha male stood his ground and fought them off. 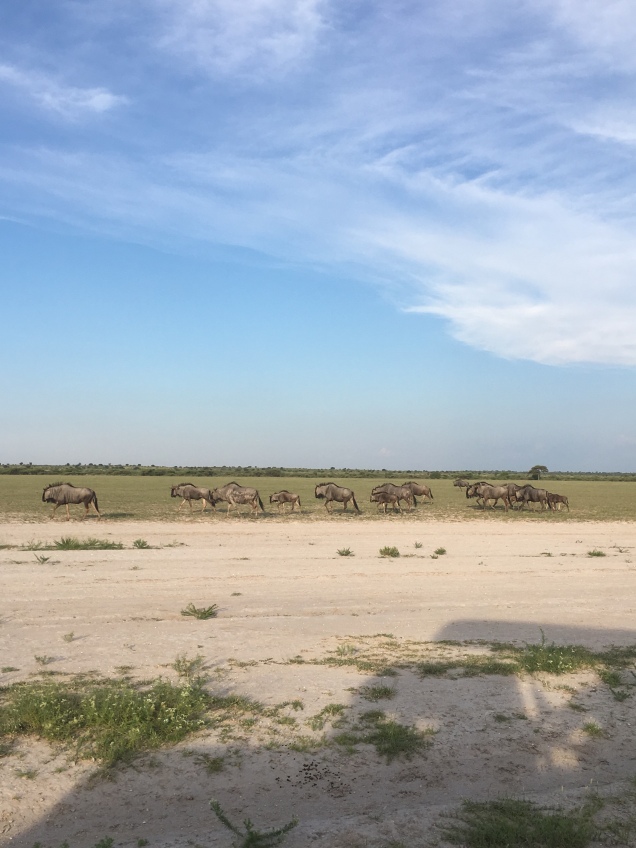 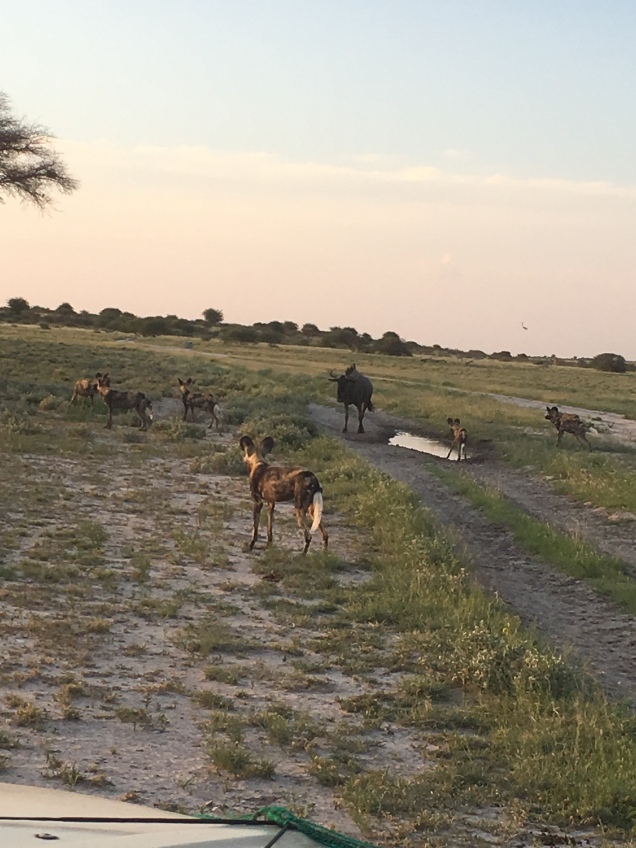 It was fun to watch the wild dog’s ferocious attacks from all sides. When we got back to camp we were glad we had eaten before the safari, because we were swarmed by hundreds of stink bugs. Little black bugs, attracted by the light of our head torches and the fire and excreting the most unpleasant smell. They can totally make your food and drink impossible to consume if ending up in there. They also found their way into our hair and under the T-shirts. To avoid them we had an early night…

The next day’s morning safari saw us driving south. We left before sunrise and enjoyed the view in the vast open kalahari with a morning coffee.

Later on we stopped, and Martha and Robin got out the car to look at butterflies huddling around a little patch of moist sand.

What we didn’t know at the time was that there was a lioness lurking under the thorn bush on the right, just 30 m on!!!

Luckily it didn’t decide to have a morning snack…

On the last morning drive we found a cheetah sitting in the middle of the savanna scouting for a meal. The springbok were to far off and it probably wasn’t hungry enough to stalk them, but we were happy with the sighting.

The long drive home after 4 days melting away was tiring, but the shower that evening was soooo good! Washing off 4 days of sweat and dirt, makes one feel a few kg lighter and revealed the true color of our skin 😬